You can gather unlimited amount of ammo at your gun. However, it did only one shot to fire them all. More ammo means more spread and less range. Also, game contains the eco-system of game objects with interactions between them.

Black screen (audio only) on Firefox, but Windows build works!

Graphics are cool, but music is very annoying to my taste.

Hi! Nice to see you and got a level-design feedback :3
I play it on Firefox all that time by myself, so I'm not sure about the problem,

1 bullet has much recochest that was planned to be usefull sometimes. I think that drawing ricochets would make it obvious.

Next time I should invite a better musicial than I am :)

Surprised there's not much story involved this time BTW ;D

I become less crazy after jamming with 3-4 people teams and 72 hours :)

That jam was 48 hours jam + I have to write all code completelly by myself this time. I'm sad that I had no time even for polished level design.

Exclusive backstage xD - I planned to put a one flower at the center of the map, for defending by a player. Each wave amount of flowers will grow :3 I'm not sure what the ending will be, but at games I usually decide the ending after making and playing the game.

Sounds good, in past I played a lot a game called Sentinels of Ceth (which was itself an improved "rip-off" of an ancient game Rip-Off).

But there gems you defend decreased in amount (they were gracefully stolen by drones). With increasing amount of things to defend the game might get easier the further you play (though maybe I'm imagining the idea wrong).

Anyway, I suggest you to get some rest now, you submitted something, and that's a success! :D

Thank you very much for warm and consistent feedback!
Your idea is cool becasue of "ravenge fun" and negative self-balancing loop.
However, both my and your ideas will not work with the current AI very well. (I decided to don't waste time to understand AI NavMesh that time).

It was a super trained developer's run. I had some loses, so it can be better. ^^ 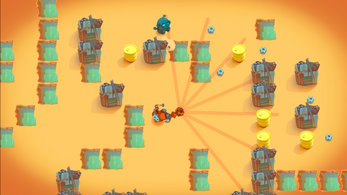 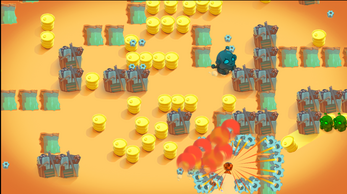